Portugal is a country of marked regional diversity, with the lush forests and mountain ranges of the north and centre contrasting greatly with the arid plains and coastline beaches of the south. In general, it boasts a temperate climate all year round with long hot summers, warm spring and autumn months and relatively mild winters, although temperatures and climatic conditions are conditioned by these regional disparities.

Portugal’s southerly latitude accounts for its Mediterranean climate. Summer months bring perfect beach days and many hours of sunshine, with temperatures averaging 28ºC in Lisbon and often going well up into the high 30s. The highest temperatures are felt in inland areas, namely the Alentejo and central and north-eastern Portugal, where the cooling effects of the winds blowing off the sea are not felt as they are in the Algarve and the western coastal areas. Sea temperatures are considerably higher in the Algarve than on the western coast.

Winters are mild by northern European standards, with temperatures averaging 10ºC in Porto, 12ºC in Lisbon and seldom reaching freezing point at sea level. Algarve winters are especially mild, with average temperatures of 15ºC and considerably less rainfall than in the north. Most of Portugal’s rainfall occurs from November to March, always falling more heavily in the greener and more mountainous north. Snow is very rare in Portugal, with the exception of the mountainous areas in the north-east and on Portugal’s highest mountain range, the Serra da Estrela, where Portugal’s only ski resort is located.

Spring and autumn months bring lovely mild weather which is perfect for sightseeing and travelling around the interior to witness the blossoming countryside in spring and the grape harvests in autumn. Intermittent showers that may occur are usually of short duration.

It is always a good time to visit Madeira. This sub-tropical island enjoys an excellent year-round climate with average summer temperatures in the mid-twenties and winter temperatures just four or five degrees lower. Winter rainfall is more intense at higher levels and sea temperatures are inviting all year long, making this a perfect holiday destination throughout the year.

Weather in the Azores Islands, Portugal

Influenced by their latitude, the Azores also enjoy a mild climate all year long. Winter temperatures rarely drop below 16ºC at sea level and summer months are warm and humid, averaging 25ºC. Rainfall can occur throughout the year, falling with more intensity during the winter months. 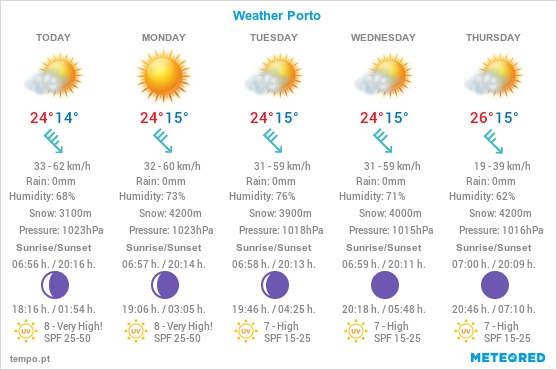